Eaglespur Manchester Terriers was founded by Enid Teague Knight, a farmer’s daughter from Worcestershire, and her late husband, Richard, in the late 1950s. Enid’s family had owned their land since the 1700s and, among all the dogs on the farm, there was always a Black and Tan Terrier, used to kill vermin. Hence, Enid had taken an active interest in the Manchester Terrier (as it was later called) as a breed and she and Richard, who shared her love of it, were determined to rebuild it in the UK. Incidentally, the name ‘Eaglespur’ was taken from the coat of arms of the Knight family.

They began by purchasing two bitches, Jill and Jasmine of Enterkine, in 1956. These two bitches alone have become legendary in the breed within the UK. Richard and Enid began showing their dogs in 1957. Their aim was to produce champion Manchester Terriers at the Eaglespur kennel and their initiative and courage has been rewarded many times over, becoming the foremost breeders of Manchesters in the UK and producing champion after champion since the 1950s. Enid has also won Best of Breed at Crufts with her very successful stud dog, Ch Eaglespur Lord Pegasus, and, in memory of her then late husband Richard, Enid donated a silver trophy to Crufts to be presented to the Best of Breed winner in Manchester Terriers.

The Eaglespur kennel is probably the oldest and largest of the Manchester Terrier kennels in the country. It is also possible that the bloodlines of all UK-bred Manchester Terriers can be traced back to Eaglespur (certainly most can!) and, as many of its dogs have been exported over the years, the name is prominent in pedigrees worldwide.

Enid Teague Knight has recently retired as President of the British Manchester Terrier Club, having previously been Chairman. She has judged the breed all over the world.  Sadly, having become disabled, she has reluctantly taken the difficult and emotional decision to hand over the reins.

Eaglespur has been at the forefront of Manchester Terrier breeding for half a century, and the new joint holder of the Eaglespur affix, Lana Colley, intends to make every effort for it to remain that way!

Lana Colley feels extremely privileged to have been selected by Enid to continue the Eaglespur kennel and, with Enid’s continued support and active interest, intends to do everything in her power to maintain its excellent, worldwide reputation. Lana’s mother Anne, a friend of Enid’s for many years, has bred top quality Labradors for over 40 years under the Jimjoy affix, so Lana has grown up surrounded by the practices of an experienced breeder and assisted with it throughout her life.

Those dogs, bitches and youngsters of Enid’s that had been selected for breeding have been transferred to Lana’s care.  Lana hopes that her family’s extensive knowledge of dog breeding and rearing will be accompanied by sufficient good fortune to ensure the successful continuation of this prestigious kennel! 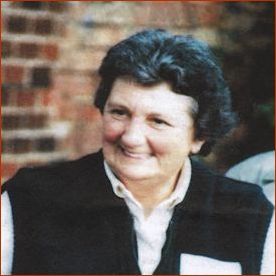 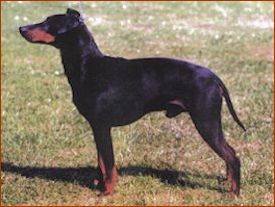 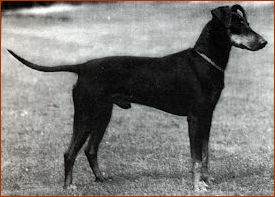 Home
History of Eaglespur
About the Breed
A Dog’s Life